How are Russian letters written and read? Where can I find them on the keyboard? How to handwrite them? Will I ever be able to remember and understand them? Today, we answer all questions related to Russian alphabet.

About the Russian alphabet

The modern Russian alphabet in its composition and lettering goes back to the ancient Cyrillic alphabet. Its letter signs have changed in shape and composition since the XI century. The Russian alphabet in the form that is closest to modern one was introduced by the reforms of Peter I and the Academy of Sciences. The letterforms were simplified and some obsolete signs were excluded from the alphabet. The next major reform took place in 1918 when the alphabet took its present form, though with 31 letters because “ё” and “й” were considered a variant of the letters “е” and “и”, respectively. Only in 1942, the Russian alphabet officially got 33 letters.

There are some more interesting facts about the Russian language.

How to pronounce Russian letters

We suggest memorizing the pronunciation with the words that sound in Russian similar to English and many other languages.

For the convenience, you can, for example, group all the letters of the Russian alphabet in four rows:

Written and printed letters of the Russian alphabet

Each letter has two types of style: printed and written. Block letters are used in books, on websites, when you are just starting to learn the alphabet. Written letters will come in handy in further training, when you write texts, letters, do exercises because in Russia, people always use handwriting in such cases. 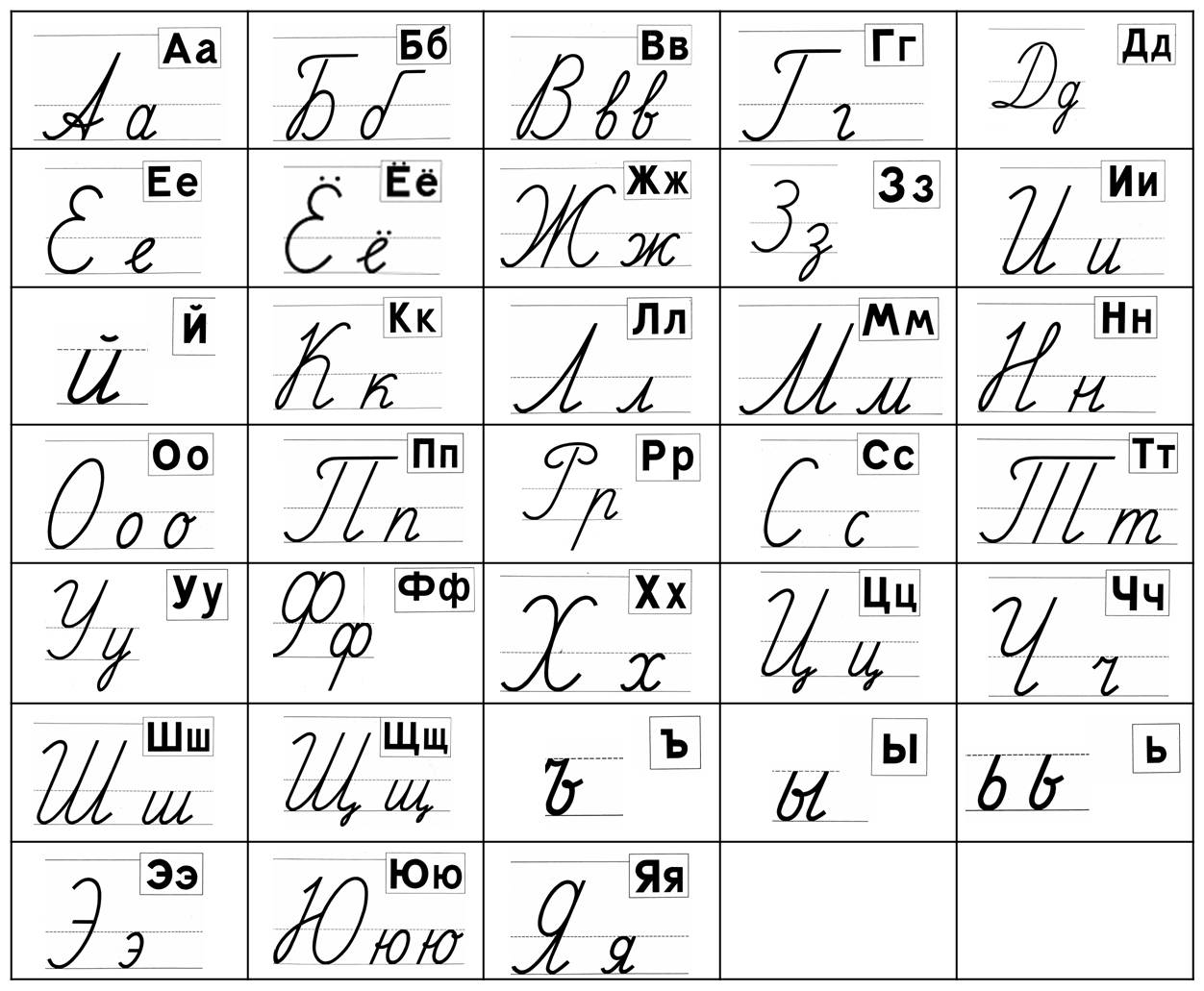 The letters of the Russian alphabet on the keyboard

Keyboard layout was not created in a random manner but is subject to certain rules. In the central part of the keyboard, there are the most frequently used letters, and those that are met rare are put on the edges. However, foreigner students studying Russian should know some intricacies.

The standard layout in the Microsoft Windows operating system on the keyboards of Russian computers looks like this:

If you prefer Apple, the layout may be slightly different:

In addition, there is a phonetic layout where Russian and Latin letters, similar in sound, are placed on the same key: S and С, D and Д, R and Р. This option is often used for people unfamiliar with the traditional Russian keyboard:

However, since the number of letters in the Russian and languages using the Latin alphabet does not match the number of keys in the second case is less. Therefore, special signs can “change” their location when you switch the layouts.

Learning the Russian language seems to be not an easy task from the very beginning. However, if you do not give up at this moment, it will not be easier but much more exciting. Good luck!

We have a lot of educational materials for self-study on our site, which can be used optionally. But, of course, the basic information is learned in the classroom with teachers of the school “Leader”. Sign up for the courses and you will speak Russian!

Not sure if this is for you? Have a no-obligation, free-trial lesson on us!

Your application is accepted. We will call You back within two hours.

If you have any questions, please contact us though the form below

Please, fill out the form below to get free introductory lesson

If you have any questions, please contact us though the form below